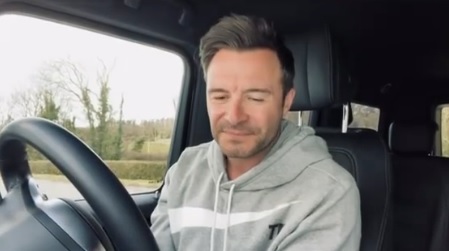 Westlife star Shane Filan shared a sweet video of him surprising a fan after she won a competition. The Sligo singer was running a competition for Daffodil Day to raise money for charity.

The initial post said: “Today is Daffodil Day everyone, a day to remember everyone that is affected by Cancer and everyone that is fighting the fight against cancer. “Please donate whatever anc wherever you can. “If you’re a Westlife fan and would like to be in with a chance to win the Ultimate Westlife VIP Experience in Aviva stadium you can donate to my justgiving page ..( Link in bio for all info ) every donation goes to @irishcancersociety . .. Thank you.”

In the video, he posted to his Instagram stories the singer was sitting in his car when he called a fan named Chloe. He then said: “I hear you’re the winner of the amazing competition.” Chloe replied saying: “OMG I can’t believe it.” Shane then replied saying: “That is brilliant I hear you’re a huge fan as well.” Chloe said that she has been to all of the band’s concerts and Shane was thrilled that she was happy to win. The singer responded by saying: “Thank you for supporting the charity. “It’s an amazing cause obviously very close to my heart so I’m happy that a happy fan has won the comp.” The fan then responded by saying: “I’m going to be a mess on the day I should warn you I’m not going to be able to compose myself.”