Shane Filan: I have been practising for Wembley gig with my children 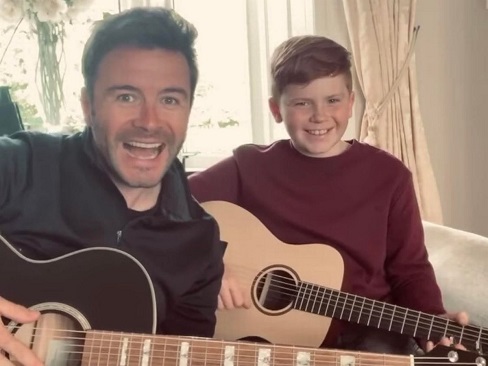 Shane Filan has said he has been preparing for his upcoming gig at Wembley Stadium with his children – all of whom have learnt to play an instrument during lockdown.

The 41-year-old singer has three children – Nicole, Patrick and Shane. Patrick, 12, has learnt to play the drums, with Nicole, 15, and Shane, 11, picking up the guitar.

The multi-platinum-selling artist has himself taken up guitar in the past 12 months – learning through weekly Zoom lessons with an instructor.

Westlife – which comprises of Filan plus Markus Feehily, Kian Egan and Nicky Byrne – are set to play two gigs at Wembley Stadium this August.

Speaking about preparations, he said: “I started to learn the guitar [in lockdown], which I have never done before. I have been doing Zoom lessons. I am slowly but surely getting there and now I can play.

“My son has started to take up guitar as well, Patrick, and my little boy now plays the drums, Shane. We have become a musical house, having our own concerts. Nicole, my daughter, has a guitar.”

He joked: “I am using my children to practice.”

Filan, who has been married to wife Gillian since 2003, said the gig was possible thanks to the “amazing” vaccine rollout in the UK.

“We are excited about it,” he said. “It is odd to think, stadium concerts people all back together. It comes down to how good the vaccination rollout has been in the UK.

“To be allowed to put this show on, it is because the vaccination rollout is so good, it is so fast. To have that light at the end of the tunnel, things will hopefully get back to normal very quickly in the UK. It is incredible how quickly it has happened. I think you will feel it on the night, looking at the crowd in Wembley stadium and go: ‘Wow.’”

He continued: “It is a pinnacle gig of our career, we have never played it always wanted to. After all this, after everything the world has been through to come back and the first gig be at Wembley stadium. It is a pretty historic weekend in our lives.”

This website uses cookies to improve your experience while you navigate through the website. Out of these, the cookies that are categorized as necessary are stored on your browser as they are essential for the working of basic functionalities of the website. We also use third-party cookies that help us analyze and understand how you use this website. These cookies will be stored in your browser only with your consent. You also have the option to opt-out of these cookies. But opting out of some of these cookies may affect your browsing experience.
Necessary Always Enabled
Necessary cookies are absolutely essential for the website to function properly. These cookies ensure basic functionalities and security features of the website, anonymously.
Functional
Functional cookies help to perform certain functionalities like sharing the content of the website on social media platforms, collect feedbacks, and other third-party features.
Performance
Performance cookies are used to understand and analyze the key performance indexes of the website which helps in delivering a better user experience for the visitors.
Analytics
Analytical cookies are used to understand how visitors interact with the website. These cookies help provide information on metrics the number of visitors, bounce rate, traffic source, etc.
Advertisement
Advertisement cookies are used to provide visitors with relevant ads and marketing campaigns. These cookies track visitors across websites and collect information to provide customized ads.
Others
Other uncategorized cookies are those that are being analyzed and have not been classified into a category as yet.
SAVE & ACCEPT