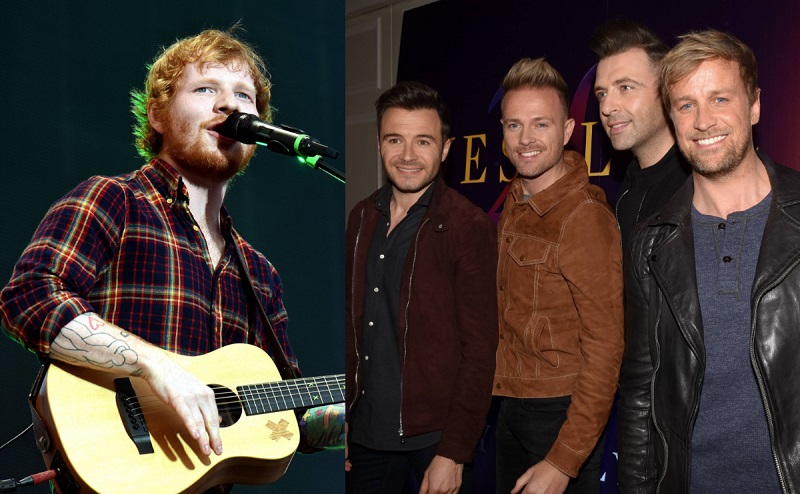 Westlife star Shane Filan believes his pal Ed Sheeran has what it takes to form a boy band.

The ‘Shape of You’ hitmaker is a huge fan of boy bands and has penned tracks for the likes of Westlife, One Direction and Boyzone.

And the ‘You Raise Me Up’ singer says the 30-year-old Grammy-winner has what it takes to put together a boy band and mentor them to success.

The 42-year-old vocalist also believes the flame-haired pop star could have been in a boy band himself.

Shane told the Daily Star newspaper’s Wired column: “Ed is a huge fan of pop music, particularly boy bands, he would probably love to be in one.

“When Ed was growing up he told me he learned how to play guitar to ‘Flying Without Wings’ and that was one of his party pieces when he was busking.

“He had the ‘Westlife’s Greatest Hits’ on repeat.”

He continued: “He was growing up listening to us and other bands and would probably not have been a solo artist 15 years ago because Ed Sheeran the solo artist may not have worked so well.

“But all the boy bands were gone after that.”

Shane hailed Ed as “one of the best songwriters in the world” and a “true fan of pop music”.

He added: “Now he’s working with a lot of these people and knows how to get the best out of vocal groups because he’s a true fan of pop music and one of the best songwriters in the world.

“He’s such a good storyteller.”

The ‘Bad Habits’ hitmaker co-wrote a number of tracks for their 2019 album ‘Spectrum’ as well as for ‘Wild Dreams’ (My Hero), and the group insisted he was the “only” man who “could get Westlife out of bed”.

Nicky Byrne said at the time: “When the opportunity came up last year to reunite … who gets a second bite at the cherry, you know? We never knew if the tour would just be a nostalgia one-off – you know, you say hello to the fans, and then goodbye. We thought, ‘We’d love to give it more than that, and try to make a new album’, and that’s when Ed Sheeran, to be fair, stepped up. I think if there’s probably only one man that could get Westlife out of bed, it was Ed Sheeran.”